I was brought into this life surrounded by death…a great part of my existence lived upstairs in that room. The signs were all around me: markings on the walls from those who’d lived there before. Their names and insignias etched in the stone…circles and crosses, stars and initials. Fragments of poems. Trails they’d carved, grooved like rivulets running through the floor. Papers they’d written on, pages half-filled with writing I only later understood. Piles of notes, some neatly stacked, some folded, and some thrown askew. All of them connected somewhere in the mind by science or illusion, alchemy or dreams. Some spiral notebooks were there, and binders labeled on each tab subject-by-subject: life, the afterlife, suicide, murder, poison, torture, suffocation, drowning, and sin. Faded brown accordion folders with sheets organized in one order or another, and piles of books. Books in boxes, hardback books, paperbacks, all about what happens when someone dies. And some odd stones, several bricks, scraps of brass and iron, tins of plaster, pieces of glass, and tools strewn in a corner. Dusty chains shadowing the ceiling.

On days when the afternoon light filtered through the windows of my room and the sun’s rays reflected on the raised letters of blue or gold in the titles, my young, fascinated mind was drawn into the books. My mother often read them to me--stories about the mysteries at the end of life just before death. And sometimes she’d recite a writer’s last known words.

I wasn’t confined there, but all my life seems to have been lived upstairs in that room. Everything I needed was there. Mom brought me meals between those walls, taught me to read there, and explained that death was what a person experienced when the body ceased to breathe and the spirit passed on. A home where the soul lived when the body departed and was put in the ground. A place of limbo where the soul remained after leaving its earthly form.

Sometimes children came to visit me there, like a friend I had for a while, Susan. We used to talk and play together up there in my room. Child talk of fairies and witches, ghosts and goblins, princesses and kings. What we wanted to be when we grew up. Fantasy dreams of life after death. We’d play together amongst the bricks and stones. Building them into castle towers and walls. But then, Susan stopped coming, I never saw her again. I don’t know why. She seemed to somehow just disappear. One day I asked mom where Susan went and when she’d come back. Perhaps you know where she is now? My mother told me she’d just gone away.

I lived in that room surrounded by death.

In that room, Mom and I read through scary passages of Hansel and Gretel who fought off being eaten by the witch of the forest, The Count of Monte Cristo where prisoners trapped in a dungeon inscribed their words in stone, and Lord of the Flies where boys killed each other off. Mom taught me the ways of life and the endings in death. She explained the ways of the mind and the ways of the flesh. What happens when people are abandoned and lost. The savageries of people trapped and confined.

Poe’s The Casque of Amontillado was one of my mother’s favorite stories. Here it is, open beside me as I tell you this. Page 216 of Godey’s Lady’s Book. Mom hasn’t been on this side of the wall for a day or two now. At first, there were the soft noises of her tapping on the wall. I can’t hear those sounds much, anymore. Every once in awhile, I hear something like a knock. I hid her behind the stonewall I made a few days ago, like Poe did in his story. Perhaps she’ll come back. What do you think? I gave her a tablet to write on, a pen, and a few pebbles.

She may want to make notes on the pages, carve inscriptions on that side of the wall, or groove her initials deep in the floor. One never knows the trails made by the dead. 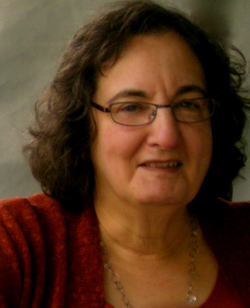 Ronna Magy came onto the planet as the colors of World War II were fading from Detroit’s skyline and Sputnik orbited the skies. She is a member of QueerWise, a collective of lesbian and gay elders doing spoken-word performances in Los Angeles. Ronna’s stories and poetry have appeared in journals and anthologies including Lady Business: A Celebration of Lesbian Poetry; Sinister Wisdom; My Life is Poetry; Best Lesbian Romance; Lavanderia; A Woman’s Touch; Hers 2; Love Shook My Heart; Heatwave; and The Bilingual Review. She is the author of several English as a Second Language textbooks.