My friend Jane is dead. She had adrenal cancer, belatedly diagnosed — stupid doctor. And adrenal cancer really sucks. What cancer doesn’t? But the deadly cells that take over your adrenal glands and then gentrify every damn neighborhood in your body, one organ after another, they’re a bunch of snotty elitist bastards. I’d rather that someone else have had it, someone I don’t know.

OK, I’m a bitch, an honest bitch. And I love my friend Jane.

At what point does a dead person enter into one’s past tense? Still, I smell my father walking around a corner and turn to hug the empty space before my heart. Still, I reach for the phone to share with him a newly discovered word, some clever inanity. Oh, not as frequently as I used to, but still — and he’s been dead since 1996.

Jane, she just died, so I figure I’ll be smelling her for a long time to come. I hope so. I hope.

I hope she didn’t know, know that she was actually dying, at that moment, that moment she had staved off with every iota of her will. And Jane’s will is formidable.

I do know Jane didn’t want to die. She wasn’t ready. She spurned her people’s tradition and protested death with the same passion she protested misogyny, inequity, racism, homophobia, idiocy. She was not inclined to speculate on an afterlife when she had a perfectly good life here and now. So Jane tried everything — and I mean every fucking thing. But money can’t buy you life. Or love. Or being remembered. Jane wanted that, all of it. And she deserves it.

My friend Jane adored the family and friends she loved to kvetch about, with the joy and humor and generosity of a — hmmm, is there a Yiddish word for a female mensch? Maybe it should be “Jane.” She’d have a good laugh over that.

And now Jane is dead. Dead and gone. Or not gone. Who knows.

I hang up on the Jane news, wander outside, maybe catch a glimpse of her essence in the sun glittered pool. There’s something—.

But no, it’s a salamander, a slim wee salamander, perished in the depths. I want to save it — screw it, it’s probably too late. I grab the skimmer and scoop up its remains, to give it a proper burial, at least, and I contemplate the lifeless creature, up close, intimate, within smelling distance of its putrefying flesh. Then the little bugger wiggles a leg at me, and I jump as pee runs down my thigh.

No matter. I’m jubilant the salamander is alive. I’ve saved it! I’ve saved it even if it didn’t need saving, and I’ll give it a safe and accommodating home in one of the sodden potted palms, figure out what it eats, name it, name it Wendy, Jane’s middle name. Wendy the salamander.

I shake the now twitchy thing into the plant, squat down low, and stare at it, stare into dark, unblinking eyes — the eyes of those distracted by death, distracted by morphine cocktails.

A gush of sorrow chokes me. I sit down hard and cry.

Jane, she’d be laughing at the pee running down my leg. But she cannot be saved.

“Jane Is Dead” is a personal essay, a literary form occasionally spurned by feminist scholars who suggest that it is, well, too personal and therefore inadequately something else. But consider Carol Hanisch’s 1970 essay, “The Personal Is Political,”[1] which was a refutation of critiques that consciousness-raising groups were navel contemplative therapy sessions, rather than meaningful discourse on the power politics of gendered roles and restrictions. She posited that our personal experiences are reflections of our social structures, of our “universal” experiences as women. I’m more aligned with Carol: My reflection on Jane’s death is personal, but the loss of an intimate is a universal experience. Except, perhaps, for the pee running down my leg. 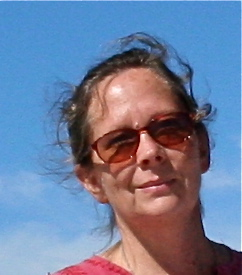 Kit-Bacon Gressitt has a B.A. in Women’s Studies from California State University San Marcos and is a former editorial board member and feminist columnist for the San Diego North County Times, where her readers started a fan club and sent her death threats, but the sales department loved her. Today, she lives and writes in Fallbrook, California, and her feminist commentary and political fiction are published by San Diego-area progressive news outlets and on her blog, www.excusemeimwriting.com. K-B can be reached at kbgressitt@gmail.com.