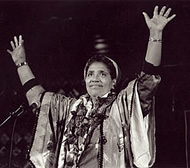 This October morning, still paling
cobalt in the sky, rain, no stars,
sun asleep, I was stripping

my bed beyond the pad. Today
a new box spring and mattress will come.
Between the rutted road of springs

and the mattress imprinted with the weight
of twenty years, marked with blood,
a stain where Dinah had kittens,

I found the mojo you made me after
your Russian trip in the mid seventies.
The blue feather came you said

from the tomb of Tamburlaine,
Timur Khan. You told me that bird's
name too, but it has gone from me.

Gone as you are now. Only the poems,
anthracite rubies, remain, and this mojo
meant to heal my ravaged lungs.

We were Amazon raiders dusty from battle,
feisty, thumping, hope riding
our shoulders like a screeching parrot.

After you lost your first breast
you joked that now you were a true
Amazon. You were always true.

I will slip this mojo into the new bed
although my lungs have healed, so that
turning the mattress will evoke you,

like a bird glimpsed rarely, for a moment
unknown. Then the name arrives, blue
tanager, flashing from another time and place.

I wrote this elegy some twenty years after Audre's death. I had written a much longer poem, Elegy in Rock, for Audre, that her daughter particularly liked. It was for the Memorial.

I had bought a new mattress and when we were removing the old one, I found a mojo she had made for me many years before when I was having a lot of trouble with my lungs—recurrence of the chronic bronchitis I had developed from smoking when I lived in NYC.

Audre had gone on a trip to what was then the Soviet Union. She had visited the tomb of the leader we call Tamburlaine. There she had seen an intensely blue bird. When she told me about this, I identified the bird for her from one of my European bird books, but I have since forgotten what it was. She picked up some feathers from that bird and incorporated them in the mojo some months later after she saw me and I was sick.

I still keep the mojo between my mattress and the spring, just under where my chest goes when I sleep.

Marge Piercy is the author of seventeen collections of poetry including November’s The Crooked Inheritance, What are Big Girls Made of?, The Art of Blessing the Day: Poems with a Jewish Theme and Colors Passing through Us, all published by Knopf. Her seventeenth novel, Sex Wars, is out in Perennial paperback and concerns the turbulent period after the Civil War, centered on historical characters like Elizabeth Cady Stanton and Victoria Woodhull. Her memoir Sleeping With Cats is in Harper Perennial. A CD of her political poetry, Louder We Can’t Hear You Yet, is out from Leapfrog Press. Her work has been translated into sixteen languages.