The Mornings After
Maria Gregorio

hawk in filled restaurant
diving in for the kill;

He grips, pulls
you out of river motion
then wonders where you went

You lower your spirit
for him to hear

He wears solemn in
shades of red

Has dried epiphanies
on his palm, imprints of
winter

You overeat
his offerings

Then move to a room
without corners,
mind at the window, waiting

He says better not to understand
everything

You say you understand;
He  leaves.

He holds mint
between his fingers
and remembers you

Pours you down
the sink in pieces

Your scent divides him
Holds him still 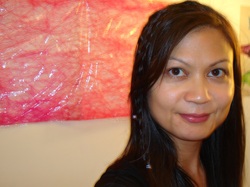