Leaving Manhattan and Dad’s nursing home,
moving up out of the bowl of town at the end of winter,
fences and grasses of Konza Tallgrass Prairie
close in around the car like skin over an open cut.
Turn left now at the highway and head back
to Kansas City away from all this dying,
the Flint Hills soil like a bandage over earth
that scarcely covers, leaving bare spots of jagged rock
sticking out all over. There never was enough dirt
to cover the hard, stony land. That’s how the tribes found it
in the first place. Flint you could break off,
cut things with, make fire with, useful hard rock in a hard land.
This spare country comforts me.
Nothing soft here, all stripped to basics.

The sky’s bare as the land flowing past me,
and on fenceposts and telephone poles,
in dead-looking trees all along the way out of this land,
hawks sit in silent pride and arrogance,
redtailed, Swainson’s, sharpshinned, Cooper’s.
Raptor-lover, I always watch for them
along this road, usually redtails and golden eagles.
This is something different, all these beautiful killers
lining the highway back to my life.
Winds wave brown grasses with rusting fence
wires under sky threatening storm,
and I feel the peace of coming to a hard place
that allows no giving way to the ache of grief.
I point them out to my husband behind the wheel,
naming each bird we pass, mile after mile.
“They’re your honor guard,” he says, almost right.
Death is the god they’ve come to honor.

This is how gods are made.
The land is wild and free,
soil just beginning to cover the warm rock.
One day, the stone lights up
with the dreams of animals.
Out of the shining,
something other awakens.
These things happen so easily.
Nature is crowded,
everything intent on being warm.
Who knew what damage dreams could wreak?

This furless, clawless thing created
from whatever’s wasted or not wanted in us,
we watched it arise
walking on two feet like Bear
but so weak and slow.
Bear can outrun a horse,
kill a deer with one blow.
It should have died but didn’t.
Some tenacity kept it alive
and breeding and changing
the very world around it

We all spoke the same language
until that changed, too.
Now we’re left with consequences.
Now we are the other,
everything other to this being.
We are the constant target in the crosshairs.
Now we live with the burden of being seen,
living into our observed death.
Great plans never work out.
Chaos is forever seeping in.
All it takes is a crack in creation
like this to ruin everything.

Here is a wound no spell can heal.
We’ve tried them all.
Not even Spider can weave us whole again.
Spoilage creeps over the whole land.
Cherish your wildness.
It’s all we have left.
Live close to the edge.

I have a reputation for wisdom
that comes simply from knowing
how to keep my mouth shut.
Some call me a harbinger of death.
I warn—I do not cause.
Because I am solitary,
I am a little closer
to that underground place
everyone fears so.
I get the news first,
you might say.
Not something everyone couldn’t know
if they’d sleep like a bird
on a branch listening to the wind.
I’ve been involved
in a long and happy relationship
with death. After all,
we love what we recognize.

But all this makes me sound so gloomy
when I’m actually one of the few
who know how to live with joy
under the great tent of the sky.
My advice?
Keep your beak and talons sharp.
Listen for the little lives.
Strike quick and silent.
Eat your fill.

Me, I like humans.
I know, Rat, Cockroach,
Possum, and me.
Not a prepossessing group,
I’ll grant you that.
But we’ve thrived
among the detritus of the humans.
Man, they throw away such good stuff!

I know, I know! I hear the others moaning
about the good old days all the time.
Well, let me tell you the truth.
There’s no comparison between
crawling around in the bush all day
trying to catch a chipmunk that’s barely a bite
or—if you’re really good or lucky—
a stringy, tough jackrabbit,
competing against every other predator out there,
and sneaking into a town
where no one can smell and hardly see
to score the leftovers from a church supper
or a ballgame’s hot dogs and popcorn.
Let them try to tell you we could get that stuff
in the good old days
when it was just us,
and I’ll have to pop them for a bald-faced lie.

Hunting used to be a lot of work
with absolutely no guarantees.
Now, I don’t know about you,
but I like the easy way.
Scavenging suits my lifestyle.
You ought to see my den now.
I’ve got a velvet couch, a cell phone,
and a waterbed—all thrown away.
Chicks go for waterbeds, even now,
at least the sleazy ones do
and they’re the only ones I’m interested in.
I’m hoping to score a flatscreen TV next
to replace this little portable I found in a dumpster.

Wolf’s had a hard time
just because he won’t adjust.
Noble and dumb!
So the concrete’s not as pretty
as the forests and prairies.
You can’t get WWF in the forests,
and it’s pretty damn funny,
let me tell you—almost as funny
as those presidential debates.
I know, I know! They’re killing my cousins
and tacking up their skins on fences in the West.
So take my advice—go East, young canid!
They just think we’re extra-mangy-looking dogs.
None of them have ever seen a real wild animal.
They’ve got dance clubs and chicks
who don’t know a real predator when they see one.
So,
they’re messing up creation.
Big deal!
I’ll thrive,
along with Rat, Cockroach, and Possum.
Let’s party!

The Cherokee call me Long Man,
yun wi gun hi ta,
because my body stretches and unravels
with my head in the mountains
and my feet resting in the ocean.
I constantly speak words of wisdom
to those who can understand me—
fewer each day.
It takes a quality of attention
fit for magicians or poets.
I have much to tell those
who expend the time and energy to listen.
I have seen so many things.
I know the history of rain
intimately, leaning on the world
to feel it on my skin
and take it inside me
to swell my body. Maybe,
they should have called me Long Woman.

I remember when
the mountains were home only to gods.
I knew your ancestors,
now tangled in the ground.
I swallowed my share and more.
I have seen innumerable generations
driving toward their deaths.
I am acquainted with the bones of earth,
ancient as the word of God
and stronger by far.
Men have tried forever
to change me and chain me,
but I still wander where I will
when I grow tired of being tame.
I remain the promise of tomorrow,
the hope of new growth
that haunts the night with hypnotic murmurs
and softens the edge between act and dream.

When all hope has fled,
come to me.

One of the most important things my Cherokee grandmother and Choctaw grandfather bequeathed me is my focus on the natural world and my sense of close relation to its non-human inhabitants.  My grandmother was my teacher, since the Cherokee were matrilineal and matrilocal and still retain strong emphasis on the female cultural teaching role, in spite of the constant and continuing efforts of the European invaders to force complete patriarchy on us.

In traditional teaching, there was a time when the archetypes of each animal and each gender of human existed together in terms of equality and spoke a common language, before humans broke the compact through hunting, killing, and other exploitation. These poems are my way of exploring those first creations and looking back through their eyes on that time and the changed relationship with a humanity that seeks only to conquer, control, and commodify all nature. 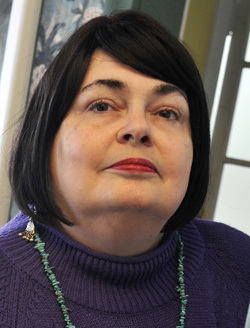