“When the history of our civilization is written, it will be a biological history, and
Margaret Sanger will be its heroine.”  H.G. Wells, 1931.

My mother died a long slow death
after eighteen pregnancies and eleven births,
like most other women on the Lower East Side
stranded in poverty, with a dearth

of answers, and hardly any questions,
given the brutal laws of Church and State.
“Conscripted motherhood” I call it
and I gave up nursing to help abate

the growing deaths of babes and women.
More pregnancies than they can bear.
Children dying for lack of care
while even physicians stand by to sneer

and point their fingers at sinners like me.
I break obscenity laws by sending
not contraceptives but just information
on birth control for women demanding

real sexual lives, not just propagation.
I write in my paper “The Woman Rebel”
that births can be spaced and even prevented.
I planned my three children, two husbands as well

who look at the world as if women matter.
My arrests, convictions and stays in jail
are time well-spent as examples of freedom
denied by the law, just as laws have failed

a woman who’s pregnant by ignorance or accident,
not a deep yearning to have a child.
My hope for the world is that painstaking thought
makes the business of mating a business as valid

as other big business.  And I’ve been misquoted:
That’s mating for all, poorest, richest and wisest.
Against the State, the Church and the silence of doctors,
The woman of today lives and arises!

Long before contraception was culturally accepted and legal abortions were available, my mother gave birth to six unplanned and reluctantly accepted babies; you always love them when they get here, she said—and did. Born into post-depression poverty, I was aware of what my parents sacrificed to raise children, and I often write in my poetry and performance pieces about the necessity for women to have full control of their reproductive lives. Margaret Sanger worked tirelessly and effectively to gain this justice and freedom for women. In this persona poem, I salute her. 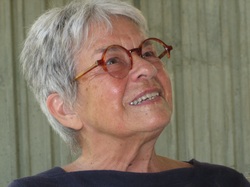