If you haven’t stepped onto a street and looked
both ways not for traffic but for who
might cram a rag down your throat, ram the
opening between your thighs with the could-be
billy-club part of him he packs each day,

If you haven’t measured an alley, driveway,
or gravel road for how long it would take to cross,
how long to get from where you are
to safety, calculated the odds, knowing strangers’ fists
loom stronger than yours, that anything you carry
might be used against you, and the road is slick,

And even though when it almost happened,
you escaped with cut cheek and asphalt eye,
even on days you pull on boots or power suit, arm yourself
with knife or phone or fifteen affirmations of your blessings,
it doesn’t stop fear, at a footstep’s crunch, from dragging the
breath from your throat, swelling like floodwater
inside your chest, insistent, deafening—and you picture women,
men and women banging pots in Chile and South Africa
to sound the alarm of a beating, or the ones in India ringing
bells, and you stretch your eyes and ears wide, searching
for who might hear your scream, and bang, bang, bang.

Tell me, you say, tell me, and that’s what I’m doing now,
but even if you lean in, hold me, listen close, what you’re learning
is about me, about then, not what it’s like to be me.
And me, who’ve never cradled a fevered child at four a.m., praying
the ice bath will work because there’s nothing left for a doctor or food--

how can I know, even if I lean toward her, listen close.

Our dark alleys, the way fear or mercury rises, the reasons we pray
or give up on God, the clanging inside, the way we yearn for someone
to carry our story’s echo in their bones—even if it’s not the same
as living in each other’s skin, if we don’t invite each other in, say tell me,
sit quiet and still, say again, tell me, and wait

how will we know.

“Listen” emerged from a confluence of anger, sadness, and fear that coursed through me like floodwaters following the brutal gang-rape and deadly assault of a 23-year old student on a bus in New Delhi in December 2012. When would violence against women stop? Despite public advocacy campaigns in India by organizations like Bell Bajao which emphasize the role of men and boys in standing up against domestic violence, this lethal rape, and many like it before and since, continue in India and across the world, including here in the United States.

Tension had been building within me for months following Virginia’s passage of the vaginal ultrasound bill.  As reports from New Delhi sparked a resurgence in my fear of rape, I found myself explaining my fears to friends who asked me to “tell” them why I felt the way I did about dark alleys and dimly lit driveways. “Listen” poured out.  While I was revising the poem, my wife and I read about Cory Booker’s food stamp challenge and completed a two-week challenge. That led to the reference near the end of the poem about what I don’t know firsthand - what I can only understand through listening.

Too often, as we struggle for equality, women fight against each other, in ways that undermine progress toward our collective empowerment. We believe that the single straight mother’s fight for justice is separate from the elder lesbian’s fight. It may be different, but it is not separate. To move women toward equality and justice, and to bring an end to violence against women, we must listen to each other’s stories, listen closely, and stand together. 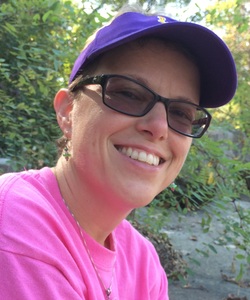 Wendy DeGroat is a poet, librarian, and teacher with poems in About Place and Sprout, and forthcoming in Raleigh Review. To give back to the poetic arts, Wendy curates poetryriver.org, a site that connects visitors with diverse voices in contemporary American poetry and with resources for exploring documentary poetry, including handouts from her documentary poetry workshop at Split this Rock 2014. She also teaches creative writing workshops for LGBTQ elders and writes articles advocating for more contemporary poetry in high school and college classrooms and libraries, such as “Make Space for Poetry” published in the March/April 2014 issue of Knowledge Quest, a professional journal for school librarians.