​In dreams, the Rapist says:
Nothing is possible,
I will kill you,
I have already killed you,
She will not come for you,
You cannot have love,
There is only money
in this man’s world--
and (he hisses in my ear)
she knows it.
She is French, and practical.

He continues:
There is only money
and you don’t know how to make it.
There is only rape
and you are the rape-ee.
We serve up girls like you
for breakfast, lunch, and dinner.
Your bird of love is a gull
who eats and shits our garbage.

His buddies join him:
Sex-crazed witch, they say,
your phantasming mind
will not save you from us.
Ineffective weapon,
when has it saved you in the past?

This is a description of Them.
They have the facts,
all the news that’s fit to print.
I have language and the spirits.
Both abandon me the moment
I balance my checkbook.

A wealthy friend once told me
I was the most impractical person
she’d ever met.
She hurt my feelings,
but she was only telling the truth.

I wish I were the poet
from a moneyed background
who said, when I solemnly announced
that I must put writing first,
“But, Harriet, how will you eat?”

Damned if I know.

The practical nurse who was my grandmother
had a mantra for me:
If wishes were horses,
poor men would ride.

Il n’y a pas de magie,
a friend informs me.
We wish magic were real,
she continues firmly,
but it is not.
Lucky her, she appears to derive
a measure of satisfaction from this.

If wishes were horses,
poor girls would ride,
you told me in so many words.

Everyone, in fact, from the beginning,
has been telling me the Same.
A Greek chorus.
Five thousand years of plunder
are not, I admit,
on my side.

In dreams, I am being raped.
It hurts in my vagina
and in every particle of my bones,
visceral humiliation
that goes on and on and on …

Just a bloody minute!
I suddenly say to myself.
The practical thing to do,
when being raped,
is to go for the jugular.

And, with the sharp teeth
of my phantasming mind,
in the nightmare that begins my new day,
I do.

God rest his soul, I say,
and let me be.

​I'm sorry, but I can't write working notes to shore up that poem. The poem doesn't proceed logically, and it is of course exceedingly personal (about me trying to survive and write in a patriarchal-capitalist society). and the rapist is a dream-figure, and the killing of the rapist that ends the poem is also within the dream world. 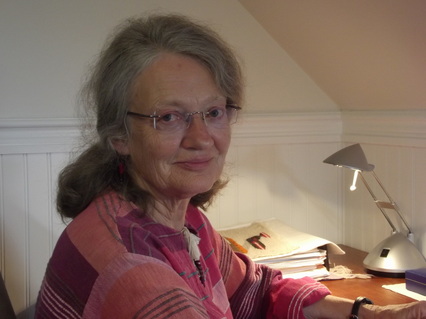 ​Harriet Ann Ellenberger was an activist in the U.S. civil rights and anti-war movements and a founding member of the Charlotte (North Carolina) Women's Center (1971). She founded and edited the lesbian feminist journal Sinister Wisdom with Catherine Nicholson (1976-81), was a founding member of the bilingual feminist bookstore L'Essentielle in Montreal (1987), published a small feminist journal on the web called She Is Still Burning (2000-2003), and co-edited with Lise Weil several issues of Trivia: Voices of Feminism (2004-8). Currently, she’s a featured contributor to the “Return to Mago” e-zine www.magoism.net and an advisor to the Mago Academy. She lives in rural New Brunswick, where she and her partner are finishing the 10-year project of renovating their old farmhouse. New writing can be found on her blog at harrietannellenberger.wordpress.com.