when she named them in
the last red runes from her erasing
sunset, they came up from under
the water, from the mouth
of the rock, little waves in
a body alive, dancing
from one crest to another
with the strong pong, sweat,
body juice,
open to the light

when she named
them in the blue runes under
her night wheel they came as
water, came
as water as fire, came
as water and fire in a body alive a body
of light, of water, a spread out temple
of rock a deep
chasm of tide-washed foam, all
roil, all pulse, all blood, all unbalanced
force in motion, all hold, all open

when she named them in
silence and uttered
blackness, the carving of her
night on its own
body, they were her own
blood and body, the creeping things and the
rooted, the ones that mounted on wings, the ones
that tunneled her dark secrets, her
body of hidden kernel, her
body in the wheat
world, in the seed
cave, in clench in knot in
noose, resplendent, fiery
seedbud that held a cathedral thrust
to the sky

When in her silver
veiled web before dawn she called
them to her
rose wave,
weed petal, spider handle, earthshaker, spinthrust,
saffron color crocus color smell of metal and turned earth,
spice taste salt savor sour apple and malt
unmeasurable  /  gape in the ozone where the sun /  burns
cave and iron ore dome of the rock /  opening arch
of deep heaven alive with the teeth of stars
in motion she called
them to her, they were
hers, and they came. 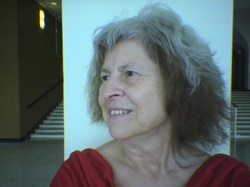 Judith Johnson’s first book, Uranium Poems, won the Yale Series of Younger Poets Prize. There have been seven more since then; the most recent two, The Ice Lizard and Cities of Mathematics and Desire, were published by Sheep Meadow Press. Her short fiction collection, The Life of Riot, was published by Atheneum and has just been reissued by FictionXPress as The Fourth Annual Greater New York Revolving Door Crisis. Individual stories have won various prizes including a feminist satire which, surprisingly, won a Playboy fiction prize, and a story which won Nimrod's 2012 Katherine Ann Porter short fiction prize.