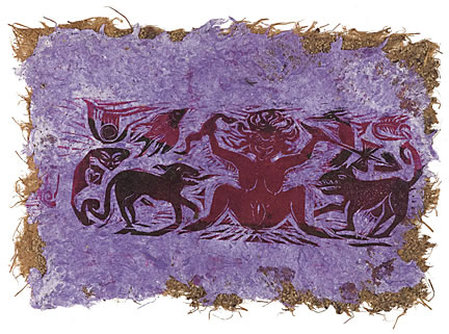 Kleiner, from "the Song of LIlith " book - woodcut printed on hand made paper from cedar bark
Lilith is the she-demon documented in Hebrew and middle-eastern mythologies. Through the ages and still today Lilith appears as a notorious night demoness, feared for her wild sexuality and social disobedience, a seductress of innocent men, a child killer and the female partner of Samael the devil. References to her are first found in Sumer, 3000 B.C., where she was known as LIL, a destructive storm.

The Talmud tells the story of Lilith in detail for the first time in the Midrash of Ben-Sirah ( 10th century ) :
Lilith was Adam's first wife; they were created equally from the same earth and placed in the garden of Eden. However, they did not find happiness together since Adam commanded Lilith to obey him and lie beneath him but Lilith refused, and when she saw that Adam was determined to overpower her, she rose into the air and flew away to the Red Sea, a place where demons dwelled. There she made her home, copulated with demons and bore their children. When Adam asked God to return his wife to him, God sent three angels who soon found her by the Red Sea and demanded that she return to Adam her husband. When she refused to obey them, they punished her with a curse: a hundred of her demon babies would die daily and people everywhere would be afraid of her. After this failed attempt at creating a wife for Adam, God created a second woman, Eve, this time from Adam's rib, so that she would behave more properly. 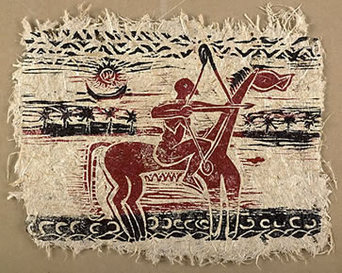 Kleiner, Sagittarius: woodcut on handmade paper made from garlic stems
From the early Kabbalistic writings of the 13th century we learn more about Lilith's mythological history. She is associated with the Owl and is part woman and part fire; she comes from the " Klipah" of the moon (the husk of evil of the waning moon) and from the ten “sphirot" ( the mystical attributes of God ) that manifest as "Geburah-Din"—Discernment.

Lilith is also related to the famous kabbalistic quartenio: the two royal couples of above and below, manifested as the Jehova-Shekhina couple (above) and the Samael-Lilith couple (below). The Kabbala also tell us that after the destruction of the Temple in Jerusalem, when the people of Israel were forced into exile, the Shekhina (Israel's mother) went into exile with her children, leaving God her husband alone, and then God proceeded to take Lilith as his consort and mistress. 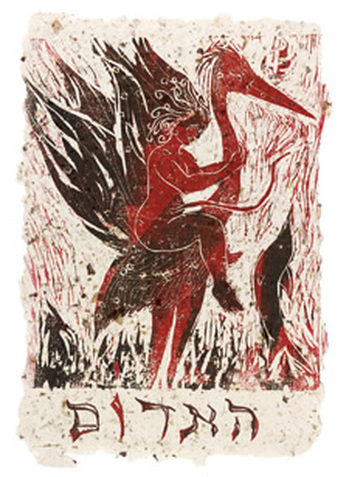 Kleiner, Lilith by the Red Sea, woodcut on hand-made paper from sea weed
Both the learned elite and the simple people feared Lilith equally, and until today the belief in Lilith as a demoness has remained a potent factor in jewish and middle eastern consciousness and conduct, as seen in writings, stories and amulets. These beliefs and practices retained essentially the same form as 4000 years ago in Sumer of 2500 B.C. In both ancient Sumer and modern Judaism, Lilith's path runs a similar course: she starts as a lowly demon associated with wild animals, seduction and evil, and slowly evolves to become a Goddess—in Sumer—and the consort of God—in Kabbalistic Judaism. In spite of this, her basic attributes never changed; in both traditions she remains a wild sexual she-demon who threatens men and babies.

From antiquity to the age of enlightenment, Lilith accompanies Mankind as a projection of patriarchal consciousness, incarnating man's desires and worst fears towards women and wild nature. She is the femme fatale, the whore, the queer, the street-walker, the fallen one. In the Light of Consciousness however, Lilith is the independent female, the free-spirited intellectual and sexual woman who demands freedom of expression and equality in all matters. As such she embodies a serious threat to societies based on the domestication of women and Nature. Lilith is not a woman for men to have and own. She belongs to her-self.

Rabbi Issac Luria Ashkenazi, the leading Kabbalistic master of 16th century Safed, had a unique view of Lilith; he saw in her a higher quality of spirit than Eve, an independent spirit which was carried through the ages by important and provocative jewish women in the history of Israel, such as Leah, Dinah and Ruth. In his opinion, these Gilgulim (reincarnations) were meant to purify Lilith's spirit and return her to holiness, reuniting her with the Shekhina. God is One, but the Goddess (a part of him) is two: the Shekhina and Lilith.

The challenge of our century is to unite Lilith with Eve and the Shekhina; to return wholeness to the feminine spirit and unite it with the masculine on an equal basis; to unite body with soul, passion with compassion, ethics with eros, in each one of us and in the world at large. The return of Lilith into the Light, and her union with Eve and Adam, is the return to the wholeness of Eden, the lost paradise.

Liliana Kleiner, Ph.D., is a visual artist, writer, teacher and Jungian therapist. She was born in Argentina and lived in Israel, Canada and Mexico. Her interest in Lilith began in childhood, and through the years Lilith's free spirit has guided her, weaving dreams, myths and nature into her art and life. She has made an art film titled "Lilith and the Tree" ( Montreal ,1993) and published a book, The Song of Lilith (Jerusalem: Yair Medina, Jerusalem Fine Art Prints, 2007). Her work is shown in her site: www.lilianakleiner.com