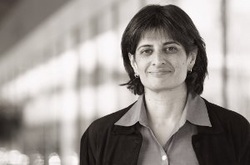 Urvashi Vaid has worked in the lesbian, gay, bisexual and transgender (LGBT) and social justice movements for nearly three decades.

She is currently a Visiting Senior Fellow at the Graduate Center of the City University of New York (CUNY). She is the former executive director of the Arcus Foundation and was the deputy director of the Governance and Civil Society Unit of the Ford Foundation. Vaid worked for many years at the National Gay and Lesbian Task Force (NGLTF) in several positions including media director, executive director and director of its think tank. She is a former staff attorney for the National Prison Project of the American Civil Liberties Union (ACLU), where she initiated the organization's work on HIV/AIDS in prisons.

Vaid is author of Virtual Equality: The Mainstreaming of Gay & Lesbian Liberation (Anchor, 1996) and co-editor, with Dr. John D'Emilio and Dr. William Turner, of an anthology on public policy history titled Creating Change: Public Policy, Sexuality and Civil Rights (St. Martin's Press, 2000). She is a former columnist for The Advocate, the U.S. national gay and lesbian newsmagazine, and has contributed chapters to a number of books.

Vaid is a graduate of Vassar College, and of Northeastern University School of Law. She lives in New York City with her partner of twenty-three years, Kate Clinton.